CANANDAIGUA , April 21, , 2010 – The 127-year-old mansion veranda and two primary garden structures at Sonnenberg Gardens & Mansion State Historic Park will get more than a facelift by summer – they will be completely refurbished thanks to a $1.8 million historic renovation project funded as part of an existing program to revitalize New York’s state parks and historic sites. 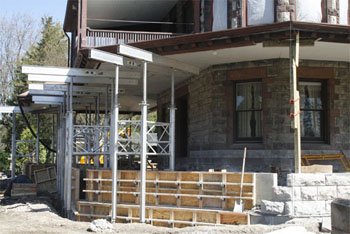 The funds, allocated back in 2006 as part of the New York State purchase agreement, allow Sonnenberg to restore the Mansion Veranda porches on the south and west sides of the 1887 building; the Belvedere colonnade and its red-roofed marble pavilion; and the white pergola spanning the hedgerows of the Old-Fashioned Garden. Construction began in October 2009 and is expected to run thru early July 2010. “Once the renovation is complete in the 2010 Garden Season, visitors will be able to enjoy more of our unique garden features and have access to additional space along the Mansion Veranda and porches,” said David Hutchings, Sonnenberg’s Executive Director. 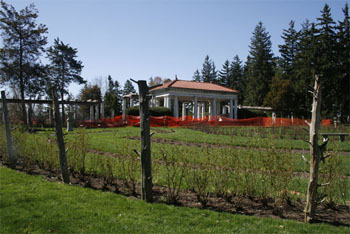 In 2006, when the estate’s future was in question, Sonnenberg’s property was purchased by the state of New York under a five-year working agreement whereby the state relieved $1.4 million of secured debt (primarily short-term loans). As part of the deal, $1.8 million was set aside for future capital renovations as well as a matching grant from the federal government (Saving America’s Treasures) valued at $367,500. It is this combined funding that allowed the New York State Office of Parks, Recreation and Historic Preservation and the Board of Trustees of Sonnenberg to initiate this major historic renovation project. Under the working agreement with the state, daily operations continue to be managed by the non-profit and its independent Board of Trustees; Sonnenberg is one of just two non-profits operating under state oversight, but without state funding.

Sonnenberg is currently seeking additional private funding for a number of future projects including renovations to the Japanese Garden Tea House, greenhouse complex repairs and a Roman Bath stabilization project. 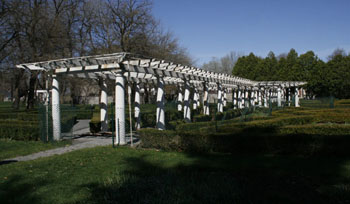 “We are grateful for all the support that came pouring in back in 2006 during such a critical time of need,” said Hutchings. “The park would not be in operation today, nor would we be embarking on such a significant historic renovation if it weren’t for the concerned citizens of our community, our volunteers, and support from the State of New York.”

“With the past and current economic climate, the timing on this project getting started couldn’t be better as it will not only benefit Sonnenberg visitors but also local contractors and renovation specialists,” said Dan Davis, assistant regional director of the Finger Lakes Region, New York State Office of Parks, Recreation and Historic Preservation. “It’s a win-win for everyone.”

The contractor for the project, Testa Construction of Rochester, began site work in September 2009, and is utilizing many local sub-contractors and restoration specialists to bring the project to completion.

Sonnenberg Gardens & Mansion State Historic Park is a historic 50-acre estate once owned by Canandaigua philanthropist Mary Clark Thompson. One of America’s longest surviving estates from the Victorian Era, the property has been operated since 1973 as a seasonal public garden attraction supported by a small paid staff and hundreds of dedicated volunteers.

In 1887, construction on the elegant Queen Anne-style mansion was completed, and it served as the summer home of Mrs. Thompson and her husband, New York City financier Frederick Ferris Thompson. Between 1901 and 1919, the widowed Mrs. Thompson and her staff created the nine formal gardens seen today. The grounds are open to the public from May through October each year. Sonnenberg remains a non-profit organization dependent upon the support of members and sponsors and its dedicated corps of volunteers.

Sonnenberg continues to seek private donations and funding that enable the non-profit to achieve its mission of preserving, interpreting and promoting the life, times and legacy of Canandaigua’s Thompson family estate. The estate will be open daily for Garden Season 2010 from May 1 – Oct. 31.