It did not disappoint with the lovely gardens and grounds. The interior of the house was amazing. Lots of history behind this site. I would highly recommend.

Fantastic and not to be missed

The history of the Mansion and Gardens is something to be shared. It was great to know that the owners’ resources and funds were put back into the Canandaigua community. A small entrance fee gives you such an awe-inspiring experience. Not to be missed!

Make a day out of the visit

What a beautiful place. The day was hot, but large trees shade much of the area. the gardens are beautiful and well maintained. The lovely house is kept well and friendly docents abound. The lady driving the golf cart gave us a ride back to our car, which included a narrated tour of several gardens. She was knowledgeable and delightful. This is a perfect place for a family to spend a day. The price was reasonable also. 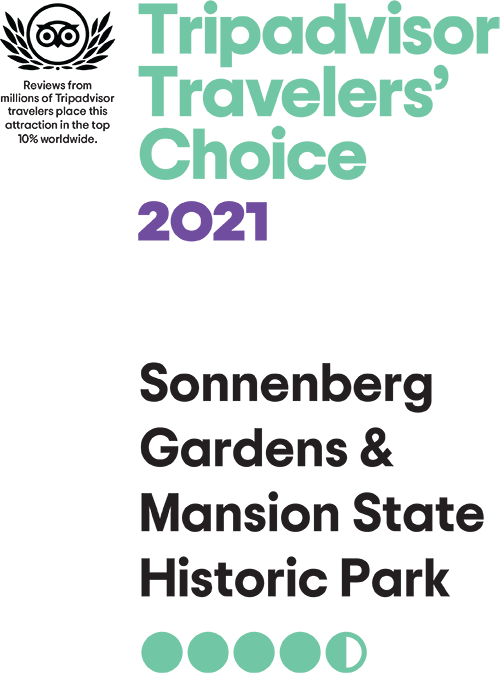 Splendid last Century Mansion and Gardens that we all can enjoy. It was Father’s Day so they also had a car show around the house. It was delightful to seat at the rocking chairs in the porch while listening to oldies and enjoying the refreshing breeze
The mansion is well preserved, but the gardens are a delight.
Hopefully, they’ll restore the Diana’s Temple in the future.

Volunteers man the carts to bring people from admission to the mansion, and back.

A well spent day frolicking in past glory.

Consider for a moment that your husband is a very successful businessman in the big city, so you live there with him. Ah, but your heart is back in the small town you grew up in. Your husband buys you a farm back home to be a summer retreat, and you work to make it over into what you want it to be.

That’s exactly what happened to Mary Clark Thompson, the wife of Frederick Ferris Thompson. Thompson was a founder of the First National City Bank (today’s Citicorp) and in 1863, the couple bought fifty seven acres in Canandaigua, New York that overlooked Canandaigua Lake, one of New York’s famous Finger Lakes. Mrs. Thompson was the daughter of a New York governor and was raised in Canandaigua.

The couple replaced the brick farmhouse with a 40 room, Queen Anne mansion. After the unexpected death of Mr. Thompson in 1899, Mrs. Thompson developed the gardens that surround the mansion. Through a long process you can read about elsewhere, the grounds were opened to the public for the first time in 1973, and you are benefitting from those events when you choose to tour the grounds.

Interesting factoid: Mrs. Thompson was a world traveler, and she cancelled her passage on the SS Titanic so she could attend a flower show.

After a nominal admission fee, you can follow a prepared route (you’ll get a map with your admission) to see Mrs. Thompson’s greenhouses, the first privately owned Japanese Garden in North America, a Roman Bath, and eight more spectacular gardens.

DON’T MISS THE HOUSE!!! My visit was late in the season of 2020 with Covid19 restrictions in place, which means I only got to see the first floor. The brief wait to get in was certainly worth it!

Be prepared for a lot of walking. (Apparently there are trams during normal times, but in 2020, the tour is strictly foot powered.) There are rest rooms near the gift shop and wine tasting room, and on the opposite side of the mansion in the carriage house. There are also some vending machines in the carriage house, a good place to take a break. Benches are scattered along the pathways, too. Bring your camera with you and plan on two or three hours minimum. Best to get there early (gates open at 9:30) for the best sun to take photos.

By the way, the grounds cry out to be the setting for weddings and private parties — and it is used for such things.

My desire is to return in June to see the Rose Garden in full bloom but a visit to Sonnenberg Gardens is appropriate and worthwhile at any time. I could write reviews of each of the gardens but you don’t want to read that much (I’m surprised you read this far) and it would be best if you just go tour the gardens. Seriously, go there. You’ll thank me later.

Beautiful garden and a gorgeous mansion!! The grounds are very well taken care of. The flowers are amazing! The volunteers at the mansion are so friendly and helpful and knew tons of information. The tram made it so easy to get around. Definitely take a stop at this place! This place is worth it!!

The reality of this place is 10x better than what you can imagine. So beautiful. So intricate. Transports you back in time, and it is unbelievable to think of this being a summer house in the 1800s. I love that you get to tour the house. The gardens are just amazing. Highly recommend spending some time here.

Our tour of this magnificent was part of our vacation through upstate New York and New England. We enjoy visiting so many historic homes of the past and Gilded Age. This one is no exception. Although some of the architecture needs some upkeep and maintenance the overall expanse of this huge property makes one wonder how they can manage such an undertaking. Obviously management should be commended. So neat to slip back into time and let your mind wander as you walk the grounds and tour the mansion. We were blessed with a had a picture perfect day. There are gift shops, wine shop, greenhouses, fish ponds and much more to enjoy. Please like my post if you find it coupled with my detailed photos helpful.

Have been going here for years. It is a stunning place full of lush gardens and beautiful pathways. It is the perfect place for taking photos for special occasions. My daughter took her senior pictures here and they were stunning. No shortage of places to take pictures in front of. The fountains made of marble, beautiful gardens, or stone pathways. The house is beautiful. Restored and decorated as it would have been when the original owners lived there. With many photos and plaques with it’s history. If you get tired or would like a guided tour of the grounds take the tram. There is a small cafe if you get hungry. To fully enjoy it and take in everything it takes about 3 hours.

We went when they decorated for Christmas. It was amazing. I wish they would bring it back.